Life potentials How Powerful is the Mind?

You can change the aging process of your body by changing your perception of reality - in just one week! 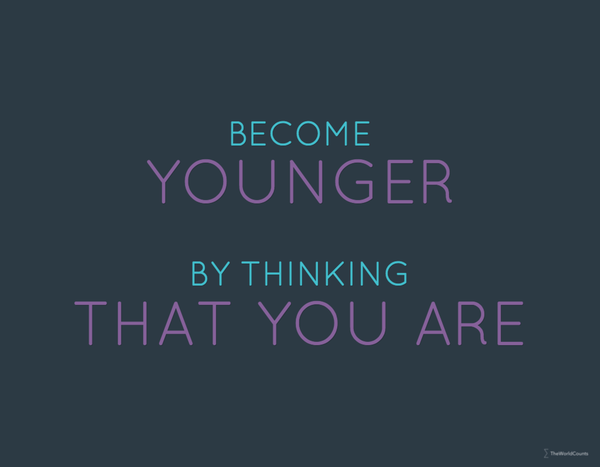 How powerful is the mind?

How we perceive ourselves and the world around us can have a real impact on our physical body. It is not just our perception than changes, measurable objective characteristics of our body and mind can change significantly within a short time frame if we “persuade” ourselves that we are actually younger than our physical age.

In other words, our mindset can change reality. Even something like the effects of the passing of time (that many considers inescapable) is something you can personally influence.

If you have doubts about the the power of the mind, have a look at this experiment from 1979.

In the experiment designed to test the power of perception, a group of 75 year old men spend a week in a setting where everything - pictures, newspapers, books, photos, magazines etc. - was from the 1950s. The researcher explained to the men that they were to act, talk, behave as if they were actually living in 1959 - a time when they were in their mid 50s. In short, everything was arranged to make them see the world as if they were 55. They were even given ID badges with old pictures of themselves and told to have conversations about things that happened at the time, their old jobs etc.

The point of the experiment was to show that our “mental construction”—the way we perceive ourselves—has a direct impact on the physical body.

Of course, the conscious minds of the men were fully aware that they were still in the year 1979 and that no time travelling or other supernatural things were at play. Even so, the subconscious perception made all the difference.

So what did the experiment show?

Before the experiment, the men were tested on characteristics that normally go downhill as people get older such as physical strength, eyesight and short-term memory.

When the men were tested after the experiment, most of them had improved in every category. For example, they were stronger, more flexible and their eyesight and short term memory had improved.

What is the significance of this finding?

Just think of the possibilities this offers you. If you can reverse the aging process through sheer mind power, imagine what other personal characteristics you can change by changing your perception of yourself. Personal traits such as confidence and appearance is something you can influence through your mental construction of yourself.

You can also use this to become happier and have a better and more fulfilling life.

Read more fascinating examples of how powerful the human mind is and how you can use that to become happier and have a more fulfilling life in the book “yobet体育官网” by Harvard graduate Shawn Achor.

Read more fascinating examples of how powerful the human mind is and how you can use that to become happier and have a more fulfilling life in the book “yobet体育官网” by Harvard graduate Shawn Achor.