Life potentials Unlock the power of your subconscious mind

In the 1950s experts concluded that the human body could not run a mile in under four minutes. A physical impossibility, the scientists said. Then along came Roger Bannister, who in 1954 broke the four-minute barrier and ran in 3:59:4 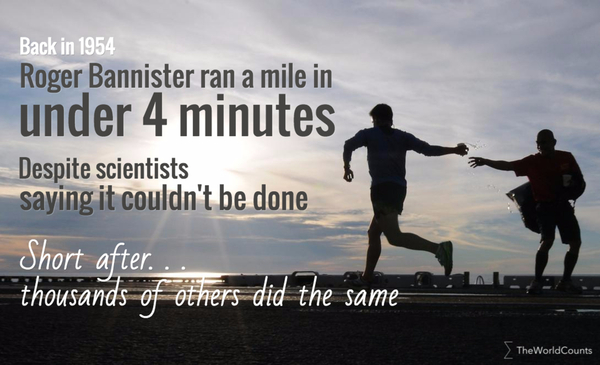 We are limited by “false” mental barriers.

After rigorous testing and analysis of the human body and the physical capabilities of our anatomy scientists concluded that it was not possible for a human being to run a mile in under 4 minutes. It simply couldn’t be done, they said.

But Roger Bannister didn’t take any notice of these conclusions.

This was a phenomenal achievement of course. And what was even more astonishing was that once this imaginary time barrier was destroyed, lots and lots of runners started breaking the four-minute barrier every year. And not only breaking it! Since 1954 the time for the fastest mile has been improved by almost 17 seconds. Currently (April 2015), the mile record is held by Hicham El Guerrouj from Morocco, who ran the mile in 3:43.13 in Rome in 1999.

The story illustrates how the human mind can play tricks with us. If we believe a barrier to exist then it does exist. But not because it is impossible to overcome the barrier. Simply because we believe it to be.

A quote by Henry Ford is very much on the mark:

This does not mean that no barriers exist of course. The three-minute mile will probably never be run. But you shouldn’t let others decide these barriers for you. If you do then they most certainly DO exist.

Use the power of your subconscious mind

If the fact that one person broke the four-minute mile barrier made it possible for thousands of others to the same within a short time then clearly the barrier was mental and not physical as the scientists had concluded.

All these thousands of runners already had the physical capabilities to break the barrier. But they needed proof that it could actually be done before they could access their capacity to do so.

In other words, the mental barrier was real until it was proven false.

Imagine the massive consequence of this conclusion. You have capabilities that you can’t access simply because you don’t think you can. But if you can break the mental barrier then you can achieve things you didn’t think possible and reach your full, real potential.

Read more fascinating examples of imaginary barriers and your potential to break through them and make your life richer in the book “yobet体育官网” by Harvard graduate Shawn Achor.

Read more fascinating examples of imaginary barriers and your potential to break through them and make your life richer in the book “yobet体育官网” by Harvard graduate Shawn Achor.