Researchers blindfolded a group of people and told them that their right arms were being rubbed with a poison ivy plant. Consequently, all the people’s arms reacted with itching, boils and redness - all the classic symptoms of poison ivy. Not very surprising - until you find out that the plant used for the study was just a harmless shrub. 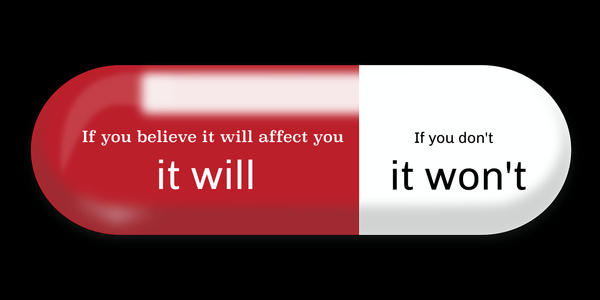 Examples of the amazing power of the placebo effect

The placebo effect is an amazing phenomenon. It basically means that the body reacts to a “fake” stimulus or treatment for no other reason than we THINK that the body is supposed to react in a certain way. There is no “objective” reason for the reaction.

Take for example an experiment where a group of people think they are being exposed to poisonous ivy (see quote above). Really, they are simply being exposed to a completely harmless substance. But even so they react as you would expect if they actually had the poison applied to their body. The expectation of a reaction was enough for a rash to break out as well as itching and boils.

The experiment was also reversed so that the group was actually exposed to poisonous ivy but told that is was a completely harmless plant. Despite the fact that they were all allergic less than one in six reacted to the poison by breaking out into a rash.

This is truly amazing! Just imagine the power we have over our body if our expectations of how the body will react is more powerful than what is “objectively” expected.

Another example of how powerful the placebo effect can be is the fact that studies have found that the color and size of the “fake” pill makes a difference the for power of the placebo effect. Big red pills are more effective than smaller white ones - though they contain exactly the same (which is nothing except completely neutral ingredients).

Somehow our subconscious mind expect big red pills to be more effective; and as a consequence they are - though it’s still just completely neutral pills that have been colored and made bigger.

You live longer if you think you will

Your perception of your own health can make a big difference. Research has shown that people who think of their own health as good lives about 10 years longer than people who perceives their health to be bad - even though their actual health condition is the same.

And the placebo effect is not the only way your mind can influence your body.

In another experiment half of the cleaning staff in a hotel was told about how much exercise they were getting from all that cleaning and how healthy this was. The other half was not told anything. Weeks later it turned out that the people who were told about the benefits of cleaning actually had lost weight and improved their cholesterol levels. Simply by becoming aware of the fact that they burned calories in their job.

Read more fascinating examples of the placebo effect and other ways you can use your mind to improve your life and become happier in the book “yobet体育官网” by Harvard graduate Shawn Achor.

Read more fascinating examples of the placebo effect and other ways you can use your mind to improve your life and become happier in the book “yobet体育官网” by Harvard graduate Shawn Achor.