Life potentials Increased creativity one of the benefits of happiness

Happy doctors make the right diagnosis faster and exhibit much more creativity than unhappy ones. In an experiment, happy doctors came to a correct diagnosis nearly twice as fast 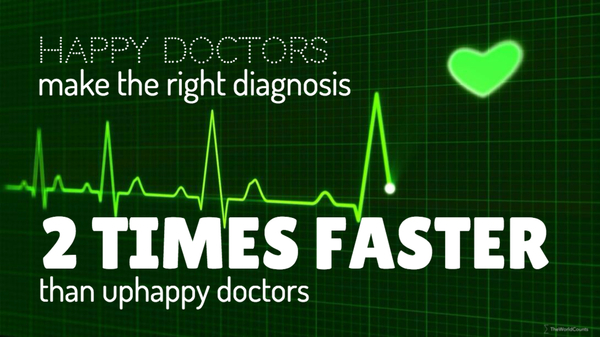 Happiness increases your performance and level of creativity

Happiness has a ton of positive effects. One of them is that is makes you more creative. To show this a group of researchers set out to test if doctors’ level of happiness and positivity had any influence on the process of making the right diagnosis of patients.

Happiness and positive emotions improve the performance of doctors

Making a correct diagnosis is of course an absolutely essential part of what doctors do. And making the right diagnosis often requires a great deal of creativity. A common mistake when making diagnoses is for doctors to making a decision to fast and then sticking with it even if there is information that points to a different conclusion - something known as anchoring. More creative doctors are better at considering different possibilities and as a result arrives at the right diagnosis more often.

So to test the effect of happiness and positive emotions a group of doctors was split up in different groups and then primed to feel different emotions by having different statements read to them. The goal was to put them in different states of mind before they would make diagnoses to see if this had any effect on their performance and level of creativity.

So what did the test show?

The results were surprisingly clear. The doctors primed to be happy arrived at the correct diagnosis faster and displayed much more creativity than the other groups. They arrived at the right conclusion almost twice as fast and they showed about two and half times less anchoring.

What is also amazing is how little it took for this major increase in doctors performance.

Can you guess how they were primed to be happy?

With candy! They were simply given a bit of candy just before the experiment (that they were not allowed to eat, so the effect didn’t come from the sugar).

Image the potential if something as simple as a bit of candy can make such a big difference in performance. Many would expect something like making medical diagnoses to be determined entirely by the quality of the education of the doctor, the level of experience, and other similar “objective” factors.

It turns out a little gift of very low monetary value can be just as important because it puts doctors in a positive state of mind.

You have the power to become more happy

Read more fascinating examples of the benefits of happiness and how a positive state of mind can influence your creativity and physical and mental well being in the book “yobet体育官网” by Harvard graduate Shawn Achor.

Read more fascinating examples of the benefits of happiness and how a positive state of mind can influence your creativity and physical and mental well being in the book “yobet体育官网” by Harvard graduate Shawn Achor.